I got to help out at the Notre Dame wood kiln again this year. Another great experience. And the results were so much better than last year!

I only had about 6 pots to get in the kiln so it didn’t take long to wad the bottoms. After that was done, I took some photos, talked to some other potters and some of the Notre Dame students, helped stack some wood, moved shelves and then helped Bill load some of his gigantic sculptures into the kiln. This involved sliding each sculpture onto is hydraulic lift, pushing it out to the kiln, lifting it up to the back part of the kiln and sliding it into place. It was a pretty good workout!

In between all that fun stuff I chatted with Zach Tate, Bill Kremer, Dick Lehman, Troy Bungart, Mark Goertzen, Cindy Gibson and whoever else I could find. I was there for most of the day on Saturday but didn’t get to come back for Sunday. I met Dale from Cleveland and re-met some of the students. We all squeezed into Bill’s kitchen for lunch.

I had one of the late shifts on Friday night, 8pm to 2am. When I arrived there was a whole crew there. The Kremers and some of their friends were still there but they weren’t there for too long. Troy Bungart was just finishing his shift. There were three students/staff there during my shift: Laura, Audra and Claire. Len Cockman and another student named Troy came for the last part of my shift. We also had one of Bill’s friends (Brian?) help. He has fired the kiln many times and really knew what he was doing.

Len stoking the side

The firing actually went really well. They moved a wall back which was moved forward last year, and made the stoke holes in the middle bigger. This seemed to help the whole kiln get up to temperature much easier. We had one shelf fall over in the kiln but everything else went pretty well. It was great to talk to Len about teaching ceramics and how he ended up at Northridge and what his plans for the future are.

I made it over in the morning so I got to see them un-brick the door. There were plenty of people there so I took a lot of photos and tried to stay out of the way until it was actually time to start pulling stuff out. Then I helped stack bricks, clean off kiln shelves, carryÂ pots, and talked to some of the other potters. It was awesome to see everyone’s work. I even got a couple souvenirs including 3 pieces that got stuck together and a couple Troy Bungart cups that he wasn’t impressed with.

The results were pretty fantastic. ThreeÂ of my 6 cups came out really nice. Two wereÂ okay. One was cracked. Very happy with the results. The cone 6 Warm Brown Stoneware survived just fine and looks pretty good with wood ash on it. I glazed the inside of a couple of my cups with a cone 6 clearÂ and I think that kept some of them from being to dry and rough inside. I’ll probably glaze all the insides next time.Â I can’t wait to wood fire again!

And everyone else seemed to get some nice results too…

Here’s a cool video that Google Photos put together for me: 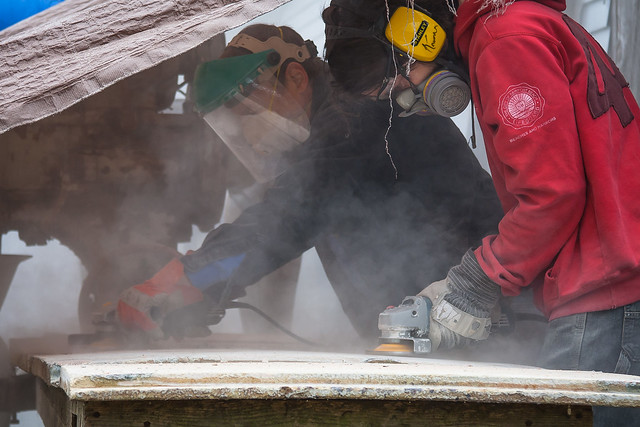